Introducing the next generation, the Nexus Eazy 320 Filtration Systems from Evolution Aqua.

The Nexus Eazy 320 filtration systems deliver dramatically improved levels of clarity for ponds. Building on the success of the award winning Nexus Eazy range this new generation of filters cleverly combine mechanical and biological filtration into one advanced filter system.

The Nexus Eazy 320 feature a re-designed Eazy filter which utilises the all new K1 Micro Filter Media, in a static bed, to deliver improved levels of mechanical filtration.

The Nexus Eazy 320 filter systems also use the acclaimed K1 Media in the moving bed to deliver outstanding levels of biological filtration. Together these filter media deliver crystal clear and healthy water. 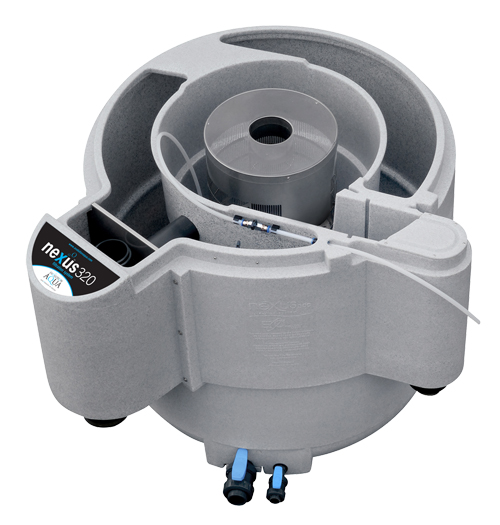 The new design of the Eazy enables the Nexus Eazy 320 to capture solids more effectively than before. K1 Micro is used inside the re-designed Eazy helping to deliver improved capture of fine particles, delivering unrivalled mechanical filtration.

The new Eazy features an improved pattern of slots in the stainless steel body which makes the filter more efficient. Water can pass through all parts of the Eazy much more effectively. This feature combined with the use of K1 Micro makes for improved flow rates through the entire mechanical filter.

Dramatically Improved Clarity. The Nexus Eazy 320 filter systems use two types of filter media to deliver optimum levels of clarity in your pond. K1 Micro is used in the Eazy to improve mechanical filtration while the tried and tested K1 Media is used in the moving bed outer chamber, delivering the biological filtration.

Easy To Clean And Maintain. A key feature of all Nexus Eazy 320 filtration systems is the sheer ease of maintenance. This still remains the case with the new Nexus Eazy systems. Simply operating a combination of air valves and waste valves ensures that the Eazy filter and main filter body can be easily cleaned to deliver consistent water quality.

Better Solids Handling. Inside the centre mechanical stage of the Nexus Eazy, there is a much larger area for solid waste to be captured and to settle. This area can then be cleaned even easier than before ensuring the filter does not clog up with unnecessary amounts of waste.

Removable Eazy. All Eazy filters used in the Nexus Eazy 320 series can be removed if needed. This added feature is ideal when undertaking further maintenance. 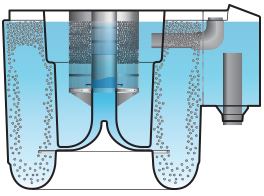 How The Nexus Works

The Nexus Eazy 320 filter is simple yet innovative. Water enters the Nexus via the inlet into the inner chamber which works as a basic vortex allowing larger solids to settle out. The water then passes through the Eazy where the finer particles are removed at the mechanical stage of filtration. From the Eazy the water passes into the outer chamber where the biological stage of filtration takes place using the K1 Media Moving Bed.

The water then passes through the grill into the Exit Chamber, where it is returned to the pond through the outlet. The Eazy is cleaned by diverting the air from the Outer Chamber to the Eazy using the air valves. Waste is then discharged through the larger waste ball valve. The Eazy has been designed so that it can be easily lifted out of the Nexus should it be needed. 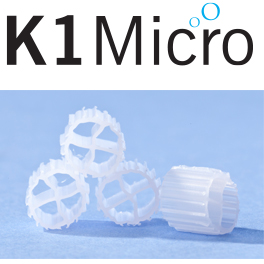 The Eazy is a stainless steel vessel containing a set volume of K1 Micro Media 20 litres in the Nexus Eazy 320 which is located within the inner chamber of the Nexus. After water enters the Nexus it rotates around the Eazy in the inner chamber with a downward motion allowing the larger solids to settle to the bottom of the chamber before passing through the slots of the Eazy into the static K1 Micro.

The water flows from all angles through the K1 Micro where improved mechanical filtration and settlement takes place and fine particles are caught within the K1 Micro. The water then flows through the slots in the centre column and into the outer chamber. 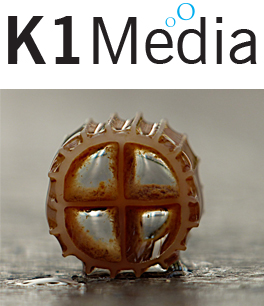 The outer chamber of the Nexus Eazy contains the moving bed of K1 Media. This is where the final stage of biological treatment occurs.

Biological breakdown occurs through different strains of bacteria living on the protected surface area on each piece of the K1 Media. These bacteria convert Ammonia and Nitrite into harmless Nitrate.

The amount of Ammonia and Nitrite produced in the pond is dependant on feed rates and the type of food used. For higher feed rates additional K1 Media should be added into the outer chamber.

In optimum conditions 250g per day of average protein content food will be broken down by 50 litres of K1 Media. To ensure excellent biological filtration of a Nexus maintain a pond pH of 7 or higher. Bacteria conversion rates are reduced in cooler temperatures.